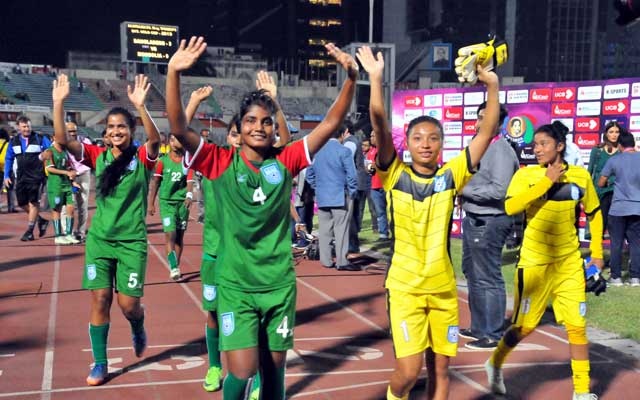 The final match of Bangamata U19 Women’s International Gold Cup is set to be held at Bangabandhu National Stadium on Friday evening between Bangladesh and Laos.

These two team will fight it out in the final battle to be crowned the winners of the first ever Bangamata U19 Women’s International Gold Cup.

The grand finale of the tournament will kick off at 6 pm followed by a gala prize giving ceremony on the day. President Abdul Hamid has given his kind consent to attend the prize distribution event as the chief guest to hand over the trophy to the winners. The first ever Bangamata U19 Women’s International Gold Cup has rolled on the ground on April 22 with the opening match between United Arab Emirates and hosts Bangladesh.

In the group stage, Tajikistan, Laos and Mongolia were drawn in Group A while United Arab Emirates, Bangladesh and Kyrgystan were in Group B. Bangladesh won their very first match against the UAE 2-0. The Bengal girls could have achieved a bigger win if the Emirates goalkeeper would not save several shots.

Tournament’s only Middle Eastern competitors UAE could not make a comeback story. Rather, they had to return home after beaten by Kyrgyzstan in their second group stage game. In Group A, Laos took the top position of the group defeating both Mongolia and Tajikistan.Mongolian girls eliminated Tajikistan from the tournament beating the latter 3-0. Therefore, Laos qualified for the semifinal round as the Group A champions while Bangladesh became the Group B champions. On the other hand, Mongolia and Kyrgyzstan qualified for the semis as the runners up from their respective groups.

On April 29, Laos smashed their semifinalist opponent Kyrgyzstan netting a total of seven goals while Kyrgyz girls could celebrate only once. Thus the Bangamata Gold Cup got Laos as its history’s first ever finalist team.The following day, Group B champions Bangladesh played against Mongolia in the second match of the semifinal round. In fact, they played like real favorites and beat Mongolia 3-0 to confirm their journey to the final.Now, Bangladesh is one step away from a prestigious international trophy. However, the Lao girls are the real threats in front of the Red and Greens. The South-Easterns can smash the hosts’ dream of keeping the trophy in home.

Football fanatics are now in a high mode as both the finalists got their own type of opponent. It will be a great moment to watch these contenders fighting over the only crown.