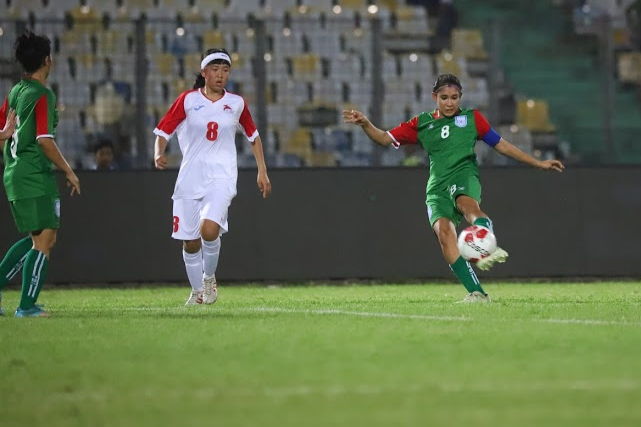 Bangladesh have confirmed their place in the Bangamata U19 Women’s International Gold Cup with an emphatic 3-0 win over Mongolia.

Monika Chakma, Marzia Akhter and Tohura Khatun struck in the semi-final at Bangabandhu National Stadium in Dhaka on Tuesday.

The trio did not let Golam Robbani Choton’s side feel the pressure after they started without injured stars Sirat Jahan Shopna and Krishna Rani Sarkar.

They now face Laos in the final scheduled for Friday. Laos beat Kyrgyzstan 7-1 in the first semi-final match on Monday.
Bangladesh, who finished group stage on top, started putting pressure on Mongolia right from the word go but missed chances.
Mongolia keeper Tsendjav Erdenebileg blocked a shot by Sajeda Khatun sometime after the forward missed a chance inside the box in the 3rd minute.

Monika broke the deadlock in the added time of the first half with a volley.

They extended the lead when Marzia’s shot from Monika’s pass found the net in the 69th minute. Tohura’s goal by the end of the game confirmed Bangladesh’s victory